(Tommy)  Are You Ready to Rumble!?!  Greetings Race Fans!  It’s time to get this race rolling.

(Smokey)  That’s right, Tommy.  After some startling fast qualifying times,  many are wondering how this year’s Dragon Tail Road Rally will shake out.

(Tommy) What’s the word on the street?

(Smokey) The fans are being really quiet about their pick for a winner.  I think they were truly stunned by how close the qualifying times were. 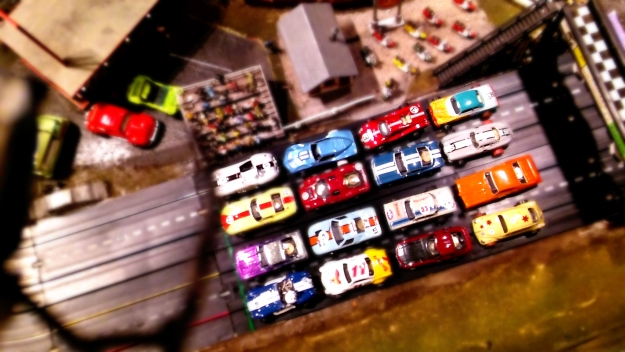 (Aurora)  Gentlemen,  It looks like the grid is in place and we are ready to go.

(Tommy) Race officials will be sending drivers out according to their pole positions.  First on the line and out of the gate is “Live Wire” aka “Ollie the Dragon” for Grand Sport Racing!

(Smokey) With a belch of flame as he shifts, Earl Essex takes the Shelby Cobra out of the first turn and up the hill.

(Tommy) Spud Boy for Nonesuch Racing is quick to follow in the yellow Ferrari.  Since the times were so close,  we expect plenty of cars battling door to door…

(Aurora) Bubba’s on his way for Team Purple in the sparkling Camaro.

(Smokey) Jake the Snake blasts off the line for Rocket City Racing in the Blue with white stripe Cobra 424.

(Tommy) The Cornhusker’s Mako Shark and Tom Bowman’s  Scud Missile are off!

(Tommy) The red Ford for Strummer Racing leaps off of the line and next the blue Mustang for J.L.M. Racing.

(Smokey) The Junkabilly Racing Corvair and Normal Racing’s Toyota, are out in quick secession.  Pappy and the Kid Racing Team A and B take off practically side by side.   Then the Orange GTO for Next Century Tech and last but certainly not least is “Flower Punch” the VW Beetle for Outlaw Hippie Racing.

(Tommy) All the cars are out on the course for the third DT Road Rally!  Aurora, how’s it looking out there?

(Aurora) Tommy,  Smokey… You weren’t kidding about there be plenty of door to door racing.  These cars were sent out so quickly that they are really bunched up in a coil.  Who’s going to strike first?

(Tommy) What’s going on near the front of the herd? 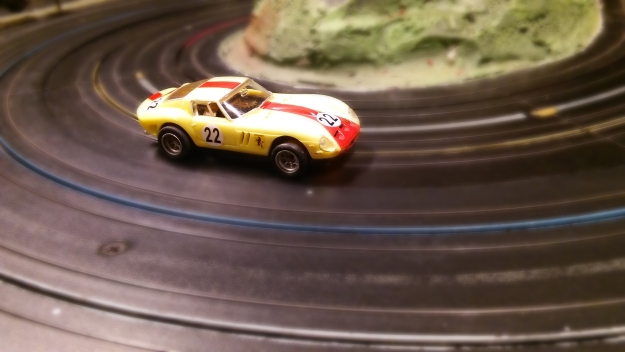 (Aurora) Well it seems that despite what Spud Boy was told;  to drive the car like he stole it…  He is still a little hesitant to open up that yellow Ferrari.  He is very cautious in the turns,  and looks like he might be dropping back.

(Tommy) How is the Grand Sport Cobra holding up? 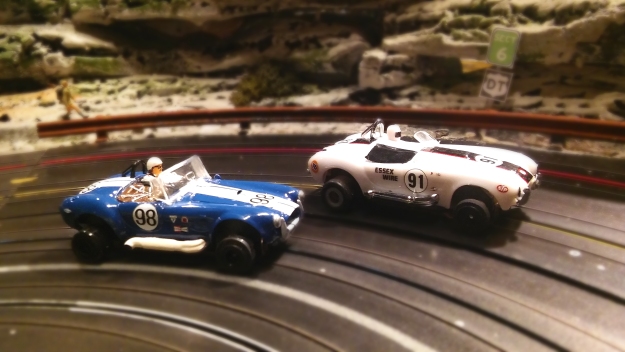 (Aurora) So far so good, but Rocket City has managed to get around Spud Boy and Bubba.  We have a real Snake fight going on… Cobra against Cobra.

(Tommy) Rocket City was not too happy about the performance of their Cobra in the last DTRR so team owner Dave Parker sent it back to the lab for some retunage.

(Smokey)  Well he must be pleased with its performance so far today.  I thought that Dave Parker was feeling confident when I saw the oversized shipping container he sent alongside his entries. He must be expecting some treasure this year!

(Aurora) Wow! The Piston Slap Ghia and the Strummer Racing Ford MklV squeezed past Powell Racing, the Scuderia Ferrari, Cornhusker Shark and Team Purple!  These cars are so clustered up, it’s anybody’s race! 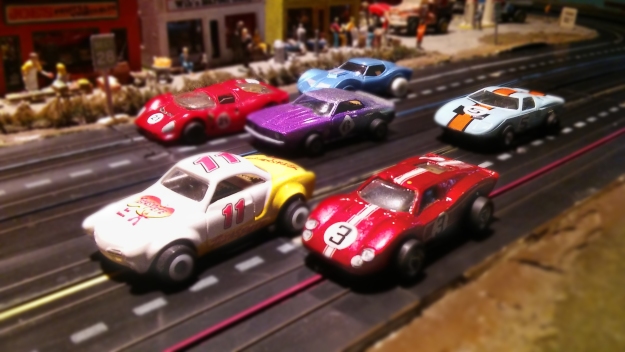 (Tommy) How are the rookies performing?

(Aurora) The new drivers are finding the Dragon a bit of a challenge.  Their narrow car set ups seem to be a disadvantage in the turns.  Junkabilly Racing’s Corvair manages to get around J.L.M.’s Mustang.  Interesting seeing these two very different machines side by side. 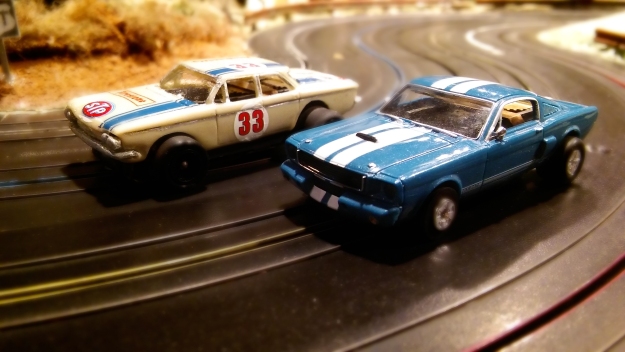 Pappy and the Kid Team A and B seem to be working in tandem and move up.

Bud Henry at the wheel for Next Century Tech.  has a fight all of his own as he tries to keep the GTO on course but ends up putting some space between him and the tail end of the pack. 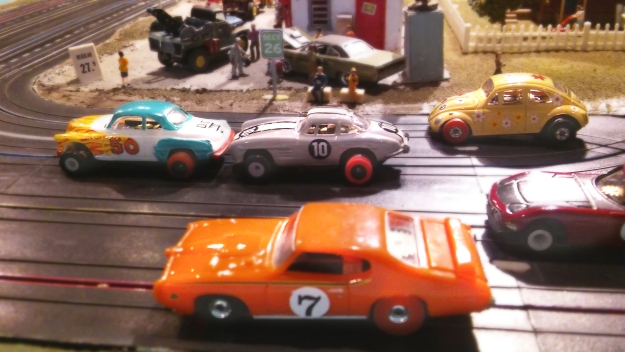 The “Punch Power” Beetle for Outlaw Hippie Racing manages to gain some ground despite Lance Ross III swerving all over the road.

(Tommy) Thanks Aurora.  Before we take a commercial break, Let’s look at the board for this leg of the race.