(Tommy) Welcome back to your flag to flag coverage of the 3rd Dragon’s Tail Road Rally.  After a thrilling and tense mêlée the cars are now heading for home.

(Smokey) Tommy during the break I heard Grand Sport Racing owner, Greg Carpenter express concerns about his car releasing those flames out of the hood scoop when the big Weber downdraft carbs aren’t kept throttled up.  At this late stage in the game he cannot afford any mishaps and after this stellar performance by his driver Earl Essex, it would be a shame to blow it now.  Some of the other owners are already congratulating him as if this thing is already in the bag, but he’s still not so sure.

(Tommy) Especially now that he is being challenge by Clutch McCoy in the Ghia for Piston Slap Racing.  Both cars are running shoulder to shoulder and each driver keeps looking back to the other and smiling.  They seem to be enjoying this …

And just when you think it’s going to come  down to the wire, Earl Essex looked over at Clutch McCoy, waved bye bye, and with a burst of flame, he smashed the throttle and was gone!

(Smokey) Momentarily stunned, Clutch McCoy shakes it off and crosses the line claiming the second spot on the podium.

(Aurora) Mean while it remains a 3 way tie for 3rd between The “Red Fish” for Strummer Racing, Jake the Snake in the Rocket City Cobra and Team Powell’s smooth running Ford GT.

Jeremy Clarkson in the Strummer Racing Ford MklV  releases some extra weight, (his co pilot Richard Hammond) by the road side without slowing down, and manages to cross the line first.  Followed closely by Team Powell and then Rocket City’s Cobra, rounding out the top 5. 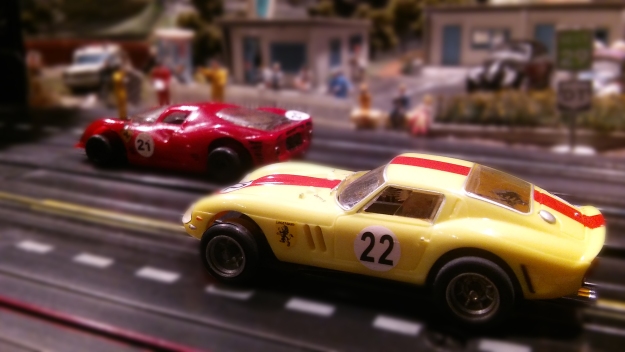 (Tommy) Roberto Asconi in the Red Ferrari ran a clean consistent race, poured it on at the end and claims 6th for Team owner Tom Bowman.

(Smokey) Spud Boy managed to climb back into the race and follows in the yellow Ferrari for Nonesuch Racing.

The Junkabilly Racing Corvair ran a good chase proving that it could be safe at any speed.

Bubba comes home for Team Purple.  He had plenty of speed,  but couldn’t find the rhythm to gain any ground.

Following closely is Skabby in the Mako Shark for Cornhusker Racing filling out the top 10.

Bud Henry wore himself out in the previous leg of the race, but manages to bring the GTO in for Next Century Technologies.

Lance Ross the lll for Outlaw Hippy Racing eager to get this race over and extinguish his craving,  bounds from a still rolling VW (no parking brake!) and rushes to the Burger Joint noticing the largest hot dog he has ever seen!

Both Palliden Spencer in the Mustang for J.L.M. Racing and Harry Gumala in the Toyota for Normal Racing had smooth running cars, but just couldn’t conquer the esses.

(Smokey) Everyone has rushed on to the track to congratulate Earl Essex of Grand Sport Racing.  He truly conquered the course from start to finish.

What an amazing performance!

(Aurora) I’d have to say across the board, the competition was fierce!  Each team really brought their A game and raised the bar!

Well on behalf of Smokey and Aurora we’d like to thank our Sponsors for their continued support of the Dragon’s Tail Road Rally.  And remember, when you are in need of something to get your motor running, consider supporting one of these fine folks and tell them you heard about them from the Dragon’s Tail!

Congratulations to all of our competitors for a fun and exciting race.  Your particapation and enthusiasm is greatly appreciated!

And Finally, Thanks to all of you that have followed the 3rd Dragon’s Tail Road Rally.  We hope that you have enjoyed it as much as we have!