(Tommy)  Welcome to the 3rd Dragon’s Tail Road Rally!  We are back after an extended break in the action as the race was halted due to a yellow flag.

What seems to be the problem, Smokey?

(Smokey) Well Tommy, Race Officials thought they saw smoke coming from the Outlaw Hippy VW so fearing the worst, they waved the yellow flag and asked the cars to pull over where they were until this was sorted out.  But now after the smoke has cleared,  the emergency crew cannot find the source.

(Tommy) It looks like Security’s K-9 Unit is showing some interest in the situation.

(Smokey) Yes,  he’s been sniffing around the Beetle ever since the smoke dispersed.  Here’s driver, Lance Ross III.  Let’s see if I can get his attention…

Lance, do you have a moment?

(Lance Ross III) Hey man, Let’s get this party back on the road, what’s with all the hassle?!  I was just listening to some killer tunes and getting my groove on.  I didn’t see any fire… maybe an errant spark from my “cigarette”…  Total buzz kill…   Nice doggy…

(Smokey) Well, as Lance walks away…  it looks like the Officials are preparing to wave the green flag and “Get this Party back on the road”…  Here they go!

(Aurora) At the front of the pack a real battle is taking place! Just when Clutch McCoy in the ’64 Ghia for Piston Slap Racing tried to make a move on Earl Essex for Grand Sport Racing, the Cobra seems to have found another gear and pulls away! 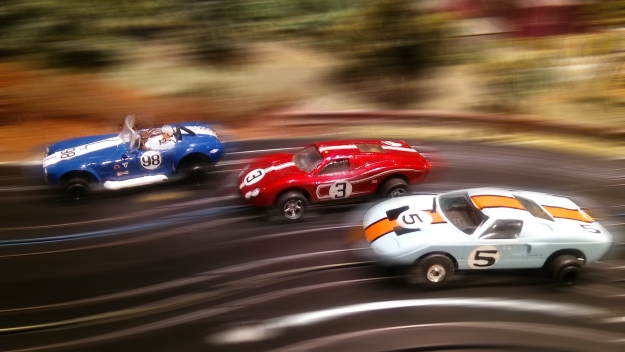 (Tommy) There are some real smooth running cars in the second group as they fight for that 3rd place spot. Rocket City Racing, Strummer Racing and Team Powell are really clawing it out!

(Smokey) Bubba for Team Purple just flew by followed closely by a red Ferrari, a Cornhusker Shark and a Corvair, all trying to see who will round out the top five. 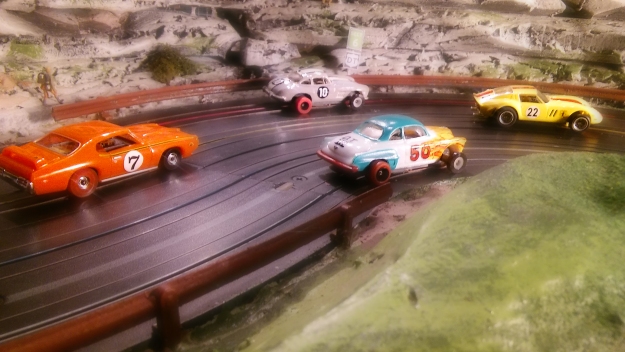 (Aurora) Spud Boy for Nonesuch Racing is trying to hold off the Pappy and Kid A and B teams as they distance themselves from the GTO.

(Smokey) The smoke has cleared for the time being for Outlaw Hippy Racing’s VW bug.  Did Lance just slip the K-9 unit a brownie?  I thought chocolate was harmful to dogs.

(Tommy) I’d be worried more about the other ingredients in that brownie.

(Smokey) Well, he’s back on the road and so is the party.

(Tommy) It hasn’t been much of a party for J.L.M. and Normal Racing as they continue to struggle on the twists.

(Smokey) By the way… which one of you referred to J.L.M.’s entry as a Camaro?

(Smokey) Well, Team Owner Yobear Jones came up to me during the break and wanted to point out that it’s a Mustang, not a Camaro for crying out loud. That kind of mistake could start a fight, so let’s be more careful.

Here’s how things stand after this leg of the race…