(Tommy) We’re back race fans! After an exciting day of qualifying runs, cars are getting ready to go out for the 2nd Annual Dragon’s Tail Road Rally.  Smokey, after all the times were collected the car from Scuderia Ferrari took the top spot.

(Smokey) That’s right Tommy. Owner Tom Bowman must be pleased with how Driver Roberto Asconi put the Ferrari through its paces.

(Tommy) It was a commanding performance that has left a few drivers discouraged.

(Smokey) True Tommy, there were some low hanging heads in the drivers’ clubhouse this morning but this is the Dragon’s Tail people, anything can happen!

The maroon Ferrari is off!

(Aurora) That car is moving effortlessly through the hills. A good steady pace.

(Smokey) Next out of the box is Franz Girlieman in the #31 Ghia. Hans, brother and teammate forced to park his car is now riding shotgun for encouragement. They’re off! Another fine running car. Will they be able to catch the leader?

(Aurora) Guys, the clouds are starting to move in. Rain may hinder the drivers.

(Tommy) We will continue the race until officials decide it is no longer safe. Drivers will need to exercise caution. 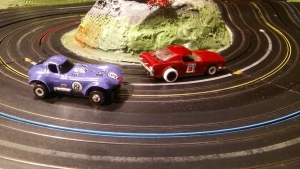 (Smokey) We had some really close qualifying times so there will be plenty of door to door racing as the cars are sent out. The candy apple red mustang from Cornhusker Racing goes out followed by the Grand Sport Racing Cheetah. These two are really battling.

(Tommy) The VW bug from Strummer Racing leaves the grid. And the top five are on the course as the rain comes down. Racing officials are waving the next cars forward. 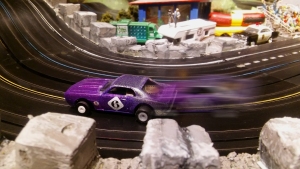 (Smokey) Returning champ Bubba in the metal flake Camaro shoots out then realizes the roads are slippery.

(Aurora) The VW Beetle from Strummer Racing is really having a rough go of it. Looks like his windshield is fogging up and He had to roll the window down to see. Rick Von Wolfenstein is weaving all over the road.  After the stellar performance at the qualifying runs, Owner Harlan Welch-Scarboro will be disappointed.

(Tommy) Fortunately, the next Beetle doesn’t have to worry about driver issues… Herbie from Rocket City Racing handles the rain without problem and moves on.

(Tommy) Next out is the AMC Javelin for Nonesuch Racing.

(Smokey) This morning at breakfast owner/driver Dano had a pensive determined look on his face. After a strong second place finish last year, he was not pleased with his qualifying run. He’s having a better run in the rain.

(Aurora) Strummer Racing’s V dub continues to weave and is now causing some trouble as the other cars are trying to pass… Wow! the Camaro, Herbie and Manx buggy were hanging back being cautious around the weaving bug, and the Javelin came out of nowhere and made a clean pass on the outside!

(Smokey) Jolene the white VW Ghia with orange stripe from South Shore Racing leaves the line but seems to have gotten some water in the tank. Bursts of power then sluggish performance. Tommy, the rain is starting to play a big part in the performance out there. I look for the officials to call it soon. 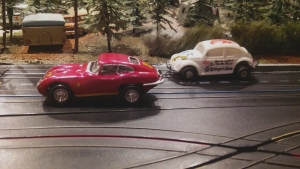 (Tommy) Yes, road conditions are starting to deteriorate. The Dodge Dart from King Racing takes off and has some trouble with slippery tires but driver Ted E. Baer manages to get the Grape Deuce around the Strummer Racing Beetle. 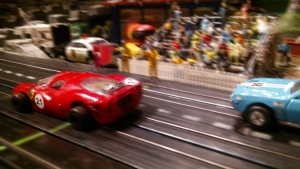 ast out goes the Jagarri from Outlaw Hippy Racing. Driver Guido Da Britt doesn’t seem to mind the rain too much and manages to also go around the struggling bug.

(Aurora) Visibility is getting bad up here and I’m not sure I’m seeing correctly but it looked like while Girlieman in the #31 Ghia was busy holding off the red Mustang and purple Cheetah, the Nonesuch Javelin flew by them. The Javelin seems to have the right tires in the rain!

(Smokey) Well, just as Dano was setting his sights on the Ferrari the officials waved the red flag. Drivers are instructed to return to the pits until conditions improve.

(Tommy) Before we break for some words from our sponsors, Let’s look at the board and see where things stand.