(Tommy) Thanks for keeping it tuned right here for your coverage of the third Dragon’s Tail Road Rally.  We are back after a short break with our broadcast of these qualifying runs as 16 teams fight for the top pole position.  I’m up in the press box.  Aurora’s up in the copter providing us with some aerial views and Smokey’s down amongst the action.  Smokey, How’s the energy among the fans?

(Smokey) Tommy, there’s quite a bit of chatter in the stands about the performances that we have seen so  far today.  Some of the runs are already faster than of years past!

(Tommy) Smokey, what’s that chant coming from the stands?

(Smokey) Here comes a crowd favorite. a returning warrior. The crowd is shouting “Scud, Scud, Scud, Scud!”  It’s an endearing term for our next contestant, Roberto Asconi as they roll out the ’67 Ferrari for Scuderia Ferrari.  Team owner Tom Bowman from Virginia Beach has so much faith in his driver and car that literally nothing has been changed since their last outing. Well except one thing… after their disappointing performance of the last few heats of the previous DTRR due to Asconi’s unfortunate encounter with some K-9 waste and his shoes, the team’s crew chief installed one of those hedge hog boot brushes on the car’s side skirt.  They are not taking any chances this year Tommy.

(Tommy) It looks like Asconi put the brush to use just before he climbed in.  And he’s off!

(Aurora) A real nice run.  The bristle brush must have worked… looks like he beat his previous lap record!

(Tommy) Next up for his third DTRR is team Owner Greg Carpenter of Grand Sport Racing from Lexington, K-Y.  His first entry is “The Gray Ghost”, a 1955 Porsche 550 Spyder.  Smokey, you mentioned the air cooled engine cars earlier and that they weren’t all V-dubs.  There’s a Corvair in the mix, well there’s also this Porsche.

(Smokey) That’s right Tommy and it’s idling nicely, getting ready to go.  Unlike the VWs and Corvair, it’s engine sits in front of the rear axle making it a  mid engine. Which should help it tremendously while tackling the dragon’s backbone. Not much is known about the driver J.D. as he gets the thumbs up and is on his way.

(Aurora) Guys! He is really making this look easy. Wow, that was a sweet run.

(Smokey) It takes a lot to impress you Aurora and the crowd agrees with you!  The officials are checking and double checking their equipment…  It’s a new track record!!!

(Tommy) While we gather our composure and wait for the next car to get ready, we’d like to Thank one of our Sponsors, Habby’s HO Slot Car Lube Shop  home to Free-Jet and L.A.B. oils.  Folks when you’re working on your cars and you need some parts, visit our sponsors and tell ’em you heard about them from the Dragon’s Tail!

The next car for Grand Sport Racing is up and ready to go.  This is the second appearance for “Live Wire” at the DTRR.  It was an entry in the inaugural event.  This 1965 Shelby Cobra also has another name which is quite appropriate for this race, “Ollie the Dragon”.  Earl Essex is behind the wheel.

(Aurora) Now I know how it got the nick name! That belch of flames could be seen way up here as it took off!  But that’s not all that I see.  Earl Essex can drive that car!

(Smokey) It’s official.  Back to Back track records!  The fans are going nuts.

(Tommy) Next up also from Kentucky, but new to The Dragon’s Tail Is the racing team Next Century Technologies.  Team owner Joel Harding has transported two cars to test out on the course. The first of the pair is a turquoise Ferrari GT250 driven by Tracer Lynn.

(Aurora) The car handles well in the curves, but doesn’t seem to have the gas in the straight a ways.

(Smokey) Next to go out is a beast.  The bright orange GTO driven by Bud Henry swings wide on the turns and plows through the course.  He manages to pull off a respectable time for a rookie.

(Tommy) Here comes a couple of beauties from Normal Racing out of Joliet, Illinois.  Both of these cars were customized by team owner Brian Bueschel along with his chief parts provider Rob Asnoff.

(Smokey) This gold flaked Ghia is something to see.  Rusty Cooter is behind the wheel and he doesn’t seem nervous for his first time on the Dragon!

(Tommy) The second car for Normal Racing is anything but normal. A limited production sleek, high performance fastback from Japan.  This Toyota 2000 GT seems to be ready for the challenge.

(Tommy) Both cars get fantastic times, but Gumala in the Toyota edges out teammate Cooter in the Ghia.

(Smokey) I recognize this next car! It’s the Bubba-mobile.  Team Purple returns for a third time and owner William Milholen from Carrollton, VA has sent Bubba back to reclaim the crown at any cost.  Let’s see if I can get a word with Bubba before he takes off. Bubba how’s it feel to be back for another go on the Dragon?

(Bubba) Oh hey Smokey. Yeah Team Purple is back baby! The first year of the Dragon we pretty much dominated and I think Team Purple scared everybody, so they had to change the rules.  But that’s cool… we still did pretty good the second time around.  I came in 5th or something…

(Bubba) Yeah whatever, something like that 3rd, 5th 8th whatever.  It’s good to be back on the Dragon, Baby! Hey somebody said there was doughnuts around here… I gotta go, but save me one or two or four. Ok? Later! 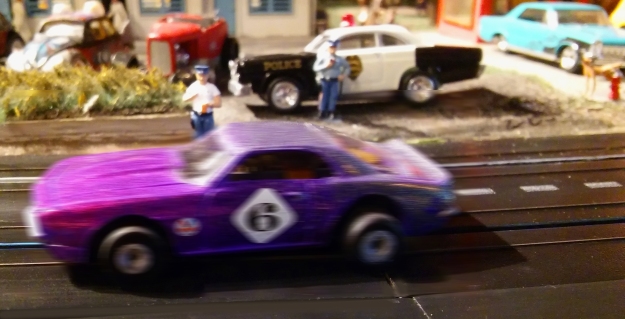 Bubba passes in a flash, but he can still spot a doughnut!

(Tommy) Time for another break and a word from our sponsors, but don’t go away.  We still have plenty of racers left to qualify.  Here are the times for this latest group of cars.