Tommy here once again. We have Red Bull Racing and King Racing entering the pits. What’s the news Smokey? 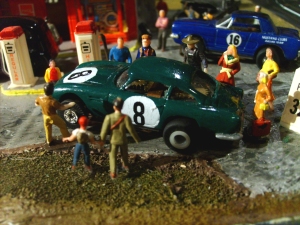 (Smokey) I don’t know if you can hear it from where you are, but the crowd is going wild. We have a new fastest lap from King Racing at an 8.86. That narrowly beats out the 8.88 from the ’65 Mustang of team Austin. Here are the results from Red Bull Racing and King Racing. 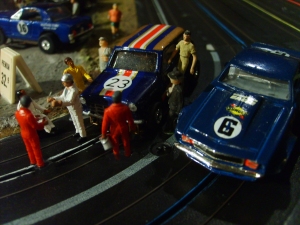 (Tommy) Those are some good runs. Wait a minute Smokey, do we have a tie for Red Bull Racing?

(Smokey) Well, the Marshalls are already discussing it. David is already listed as the victor of the two, so let me get confirmation… Yes Tommy, David did take the Qualifying run for Team Red Bull. Timing and Scoring apparently has a tighter timing result than what is posted.

(Tommy) So we have some really close battles already. I hate to see Mark go home with such a close run.   So it will be the ’59 Austin Mini and BRP Aston Martin DB5 moving to the final race. 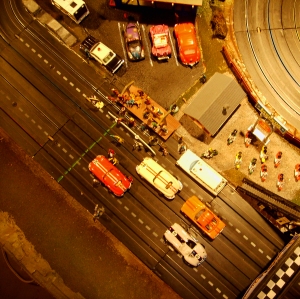 (Smokey) Hey Tommy, I am down here with the next 4 cars ready to go out.

(Tommy) Next up is Team Jaguar and Grand Sport Racing. Both teams have been here at the Dragon’s Tail before. Both Teams are out of Kentucky and show up at many venues together. Team Jaguar is owned by Dan Cocke and is known for really pulling some power out of his motors. Grand Sport Racing is owned by Greg Carpenter who owns Grand Sport Speedway. Having their own track allows the team to really tune their chassis. They always show great handling out of the

(Smokey) I have Driver “Jag Boy” in a 1961 Jaguar XKE #33. This is a light weight special developed by Team Jaguar especially for this event. “Jag Boy” says he got this nickname from his dad. These are the only cars he drives. He is on his way.

(Aurora) That Jaguar is on a blistering pace. It looks like we have a good contender for the lead.

(Smokey) We have another sleek looking Jaguar down here. Car #50 is a white 1962 Jaguar. It is driven by Hawaiian native Dan-o. He must have had a lot of practice running around those twisting roads on the main island. He’s off.

(Aurora) This is another fast car. It looks like a massive power slide through turn one but well controlled.

(Smokey) Up next for Grand Sport Racing is a ’65 Shelby Cobra. Bart

Essex is listed as the driver. We are not sure if he has any affiliation with the car sponsor Essex Wire. Car #91 is fast into turn one.

(Aurora) We have another fast one. Looks like we have a strong running group out this time.

(Smokey) The last car up is a ’65 Ford Mustang. The driver of this orange beast is James Buffet. Someone said he is possibly from Margaritaville.

(Aurora) We shouldn’t have a hard time following this orange car. It really contrasts the green foliage from up here. I think we may have a new fastest time out of this group.

(Tommy) Well the next 4 cars are underway. It will be interesting to see what times this group yields.