(Tommy) Ford, Ford, Ford. Henry should be proud of this last group coming in and their times are very close.

(Smokey) Times have slowed down a bit in this grouping. I think the cold has played a role here. Let’s look at their times.

(Tommy) Looks like the big block Ford engines won out on this one. Henry and Whitey had some very close times.

(Aurora) Yes Tommy, all the cars were really hanging on to those corners.

(Tommy) I think this was the first group that didn’t set a new fastest qualifier. It really has to be this cold weather coming in.

(Smokey) Tommy, the Marshalls are really worried about the snow. They will now be sending the teams out in sets of three. 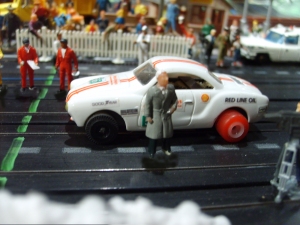 (Tommy) Next up will be South Shore Racing, Owl Racing, and Owens Racing Ent. South Shore Racing is owned by Paul Ryer out of Massachusetts. They have a one car entry. Next we have Owl Racing out, currently located in Indiana. Owner Destany Lewis is rumored to be moving the team to California. Last in this group is Owens Racing Ent. Owned by Jon Owens. He is another Kentucky native. Kentucky is well represented at Dragon’s Tail today.

(Tommy) Several Karmann Ghias today. They all seem to be doing well. This one will probably post a good time also.

(Tommy) Those are some nice looking cars. I heard that ’68 AMX is bone stock.

(Smokey) Yes Tommy, it is bone stock except for the safety equipment. It was doing very well in practice. The cars are being sent off now Tommy.

(Aurora) First off is Max Creek for South Shore Racing. It is doing very well through the first set of corners.

Alan Kulwicki leaps one of the hills and nearly careens into the wall, but manages to keep it under control.

Destany Lewis is really handling that Triumph TR3. Should be a good run for her.

Wheels are really spinning off the line for Nathan Nitro. There must be a big block in that ’63 Vette.

(Tommy) Another three teams are on their way. Looks like we only have three more teams left for qualifying.