(Tommy) Here is the review of Stage 1. Aurora will update us with the latest on track. 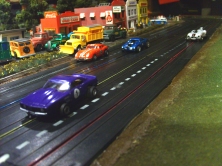 (Aurora) Bubba is still maintaining the lead for Team Purple.  “Jag Boy” and Carl Scarborough are still dueling for position. “Jag Boy” was able to make it back past the Karmann Ghia of Junkabilly Racing down the straight. Bart Essex is hot on their tail.

Henry Ford of Team Powell spun out after one of the hills. This allowed Whitey Johnson and Destany Lewis to stream

past. Max Creek is now on Henry’s bumper.

Hey what happened to the Owens Racing AMX? It is being pulled out of the trees now. Everything seems to be OK with the AMX, but he will lose several positions. The Aston Martin (King Racing) and Ferrari 250 SWB (Glimmer Twins Racing) make it safely past the track crew. The Stig has to take the long way around the AMX and loses a

The Gray Ghost comes down the hill as the AMX gets underway.

Pete “Pit Stop” Passer is changing a tire. This is not the type of pit stop he needed.

David Coulthard had been trailing the pack until Andre’ Lefebrve started slowing down. His Citroen is reported to have rear wheel bearing issues. I don’t believe this is going to get any better for Andre’.

(Tommy) With an uneventful start, things are really heating up. Team Purple still putting on a good show for his owner William Milholen, but he has some experienced racers of the Dragon’s Tail dueling it out behind him. I think he is taking advantage of that situation. Mid-pack it is very hard to follow the movers and passers, but here are the results as they go through stage 2. 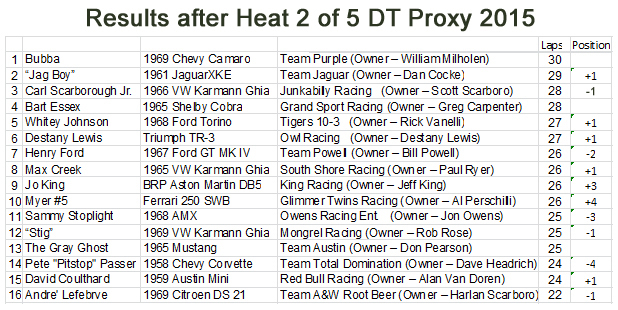