(Tommy) Here is the review of Stage 2. Aurora will update us with the latest on track. 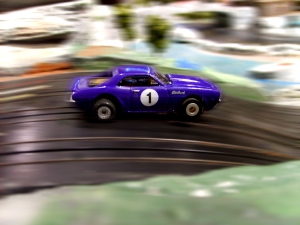 (Aurora) Bubba is setting a steady pace. The ’69 Camaro appears to be slowly pulling away from the other leaders, practically hurling himself down the sloops. Wow was he actually air born on that one?!

The top five have settled down and have a good distance between them.

There is however a lot of activity mid pack. Henry Ford may have damaged his car in the

stage. He is really struggling over those hills. He is falling back fast. Is that oil trailing from his car?

Destany Lewis struggles with a loose wheel. She is easily passed by Max Creek and J

o King. Looks like the Glimmer Twins Ferrari is poised to pass as well.

The big mover is The Gray Ghost of Team Austin. He really has a rhythm going through the corners. He has moved up 5 positions.

Sammy Stoplight must have damaged his AMX when he went into the trees in stage 2. He is still falling back. What a shame after such a good qualifying run.

The “Stig” is giving it all it’s got in the corners, but the low riding Ghia is struggling on the hilly parts of the course.

(Tommy) Here are the results of stage 3.