(Tommy) Race Fans, we have a real battle going on at the 2nd Annual Dragon’s Tail Road Rally!!! We are a little over the halfway mark and no one is ready to roll over yet. We knew this was going to be a combative challenge before we reached the halfway hump and we have not been disappointed.

(Smokey) Hump is right Tommy.  Before we left for the last commercial break we talked about the various trouble spots on the course and the number one technical challenge is without a doubt the Backbone, a series of humps and twists that are starting to take its toll on the drivers and their cars.  Most particularly is the low sitting ’64 Ferrari 330 P4 of Scuderia Ferrari Team.  Driver Asconi struggles to keep his feet on the pedals.

(Tommy) You would think that a team that has excelled at a rough course like Sebring wouldn’t have issues with the Backbone.

(Smokey) A rough course is one thing, but these humps are acting like a launch pad for the “Scud Missile”.  Team owner, Tom Bowman was asked what he thought about it and he said,  “Humps are good… on a SuperCross track”.

(Aurora) Clearly he is not amused.  Despite the beating to the Ferrari, Asconi manages to stay with the front runners.

(Smokey) Dano is not giving up. He wants this. His Javelin is running smooth and he has the rhythm down…

(Tommy) The current leader if you can really call him that is Franz Girlieman in the custom Ghia, but these cars are running so close. The lead keeps going back and forth.  It’s hard to tell who’s the front runner.

(Smokey) Well, to the guys in the stands wearing the “I’m with Girlieman” t- shirts, it is very clear who the leader is!  And you can’t rule out Jerry Titus in the purple Cheetah.  As long as he can keep the engine from overheating which Cheetahs are prone to do, he could continue to impress us with his skills. 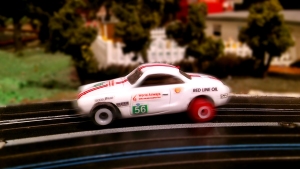 (Tommy) There are a lot of steady strong running cars mid pack that are also fighting for a spot in the top five.

(Aurora) McLovin is feeling some heat from the Herbie Love Bug.  The red Mustang has picked up some speed as he tries to get away from the Rocket City Beetle and the Junkabilly Dune Buggy is not far behind. 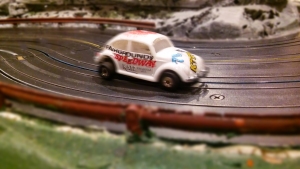 (Smokey) Don’t put a fork in Bubba just yet. He’s not done as he turns in his best performance so far in the purple Camaro!

(Tommy) The fuel treatment is finally kicking in for Max Creek in the white ’65 Ghia named Jolene. It’s his best performance too.

for Strummer Racing into gear trying to get back to the middle of the pack.

(Tommy) Ted E. Baer had gained a little speed before the break but now he seems to be settling back down to a slower pace.  Being the nice guy that he is, he found time to stop for a fan photo.

enjoying his Sunday stroll through the countryside.

(Tommy) We are in the home stretch folks!!!

Let’s look at the board before we take a short break.